← News Übersicht
Benefit from the economic advantages of enhanced VHH production arising from the use of UNLOCK PICHIA 05.06.2019
VHHs, derived from camelid species, the so-called “third generation” of antibodies and also known as sdAbs or Nanobodies®, feature a number of intriguing characteristics that make them superior for many applications. Compared to mAbs and antibody fragments (Fab and scFv), VHHs exhibit equally high specificities and affinities in antigen binding and show further advantages due to their small size, high solubility, thermal stability, design flexibility & modularity, good tissue penetration in vivo, ease of genetic engineering and expression in microbial systems.

As a consequence, VHHs are currently developed for an increasing number of different applications ranging from medical use as APIs (first approval of a Nanobody® - Caplacizumab - in 2018) and in vivo imaging reagents to diagnostic and analytical applications for diverse industries.

VALIDOGEN´s PAOX1 promoter technology for protein production in Pichia pastoris provides several advantages. Very high titers along with timely adjusted expression of helper proteins (some available exclusively through VALIDOGEN) as well as lower consumption or complete absence of methanol are features which can significantly contribute to enhanced productivity and hence substantial reduction in cost of goods for protein manufacturing.

In VALIDOGEN´s labs, promoter variants are applied simultaneously in pools of expression constructs comprising the gene of interest and potentially also genes encoding for different auxiliary (helper) proteins, thereby generating a broad diversity of genomic arrangements in the host cells resulting in diverse expression profiles. In this setting, protein production in Pichia pastoris is boosted significantly. Following specialized protocols, thousands of clones can be screened in minimum time and most promising clones will be reliably identified already at microscale. Screening results are transferable into bioreactors making laborious intermediate steps for clone comparison obsolete.

In an experimental case study a set of helper factors acting either in the cytosol or the ER or facilitating translocation of nascent Proteins into the ER were co-expressed in order to investigate a potential enhancement of VHH-dimer expression. Results from microscale as well as bioreactor scale showed a 2.0 - 2.7-fold improvement of product yield. Combining all three helper factors in one expression construct led to a 3.5-fold enhancement of product yield as depicted in the graph (right hand-side). 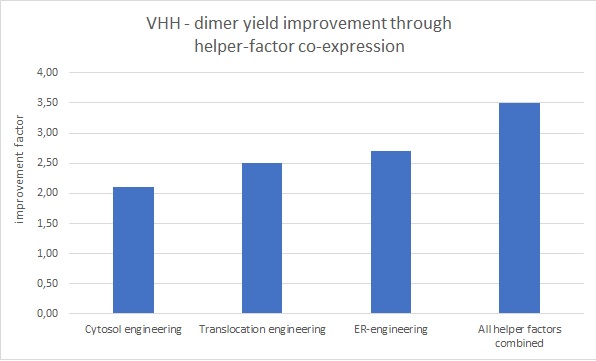 Benefit from the economic advantages of enhanced VHH production arising from ...
→ Details